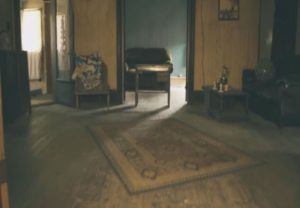 A mother tells the true story of a mysterious force that tore through her house, pushed her children, and terrified her father.

HOW OR WHY a particular place becomes haunted is a mystery, although theorized contributing factors range from certain environmental conditions to the residual aftermath of human tragedy, suffering, and death.

But these factors are of little concern to the families that live at the center of the paranormal activity. They only know that their houses are disrupted, their routines shattered, and their children feel threatened.

Lainey had no idea what lay in store for her family when they moved into what they thought was a cozy Kentucky farmhouse. There was something there… a presence that might only have been curious about these new tenants. Or was this force something more sinister? This is Lainey’s story….

These incidents occurred over several months from June, 2000 until we moved in October, 2001. My family rented a large farmhouse in the Oakland area of South Central Kentucky. From day one, something was unsettling in this home.

The first night we spent there, my husband and I were in bed being intimate, and I heard a man laughing from the vent by the stairs. I heard it three times, but my husband did not. Trying to ignore the obvious, I put it out of my mind.

It was days later and my kids had begun seeing things. They were about 5 and 6 years old then. They saw a strange orb hovering in their room one night and were terrified. They described it as having a face – like a “floating bubble” that had a face. Another time they described a light with a tail coming out of the ceiling and moving all around the room. They heard taps on the window a lot, too.

Activity picked up and we had the usual creaky footsteps and sounds that went bump in the night. The house was two stories and we decided to make a play room for the kids upstairs. I always felt on edge up there, like someone was watching me. One afternoon, my kids were playing up there and heard something that frightened them.

They both went running down the stairs, and as my younger child got to about middle of the stairs, some invisible force shoved him. He fell, as my older child was several steps behind and he saw how his brother’s feet were made to come right out from under him. It wasn’t as though he’d tripped… it was something unexplainable. Trying to not alarm or feed into the phenomena, I played it off time and again.

Then a friend came to visit. Showing her our home, we went upstairs. She looked around, rubbed her arms like she was cold and said, “Let’s go down.” She actually ran down the stairs and immediately out the door. She then confided to me that my house was haunted. I told her I knew, but didn’t know what to do about it.

Not long after this occurred, my kids had finished a large puzzle upstairs. We all went out and returned later to the lights being on in our home, not one but several. My husband went in to investigate. Finding nothing, we all went in.

Going upstairs, we discovered much of the upstairs ransacked! Things were moved, some things stacked up oddly… and then there was the puzzle, looking as though it had been blown apart from the middle. Pieces remained in one small area and others were spread outwardly, from one corner of the room to the other. It was so eerie. We never did find all the pieces.

I gave birth to a third child and the intensity of strange activity increased in the home. One day, the kids came running down and said there was “something” upstairs in the closet. Being tired of this, I stormed up there, opened the closet, walked in, and attested that there was nothing in there. Suddenly, some large object dropped next to me, but I did not see anything. It was something heavy; I even felt the floor shake as it hit. We instantly ran out of the house.

I tried to reason that maybe a squirrel was in the attic or something, but the kids knew better. They had been having nightmares in which a frightening man was the main agitator. They also said the dreams were not like others; these were so vivid and real.

Although I never saw anything, a presence was obvious – an ominous, eerie, cold presence. I discovered that the man whose family built this farm and who resided there until his death sometime in the early 1970s, died of a massive heart attack just down the road from this home. His wife lived there until just shortly before we rented the home, and there was one family of renters before us.

I finally put it all together: how the candle wax on the hardwood floors in the kids’ room and upstairs were likely signs of a séance. I suppose a portal might have been opened, and this was revealed to me in a dream: I saw people sitting around and chanting. This dream was vivid, too. I began praying more and trying to ignore all the terrifying signs.

The most frightening experience occurred soon after this. My dad came to visit from out of state. We never spoke a word of this activity to him. He slept upstairs, where I had an extra bed. My dad is not one to believe in hauntings or anything paranormal.

Well, my dad was to stay three nights. The first morning, I heard him come downstairs before 4 a.m. I was up with the baby and came into the kitchen with him. He’d already made coffee. He said he didn’t sleep well. A short time later, he gathered his belongings and decided he needed to get back home, that he was going to be on call for his job, so he had to leave that day.

I was confused and upset that he wasn’t staying. He called me the next day and told me he was sorry to leave, but something was bugging him. He then confessed that he had heard someone upstairs in the night right after he drifted off.

He heard heavy footsteps, and as he heard them approach, he looked. The figure of a lady entered the room. She was white and transparent. She walked toward him and disappeared, but the sound of her footsteps continued until it reached the bed. Then it sat down. An indentation was beside him on the bed. He was frozen with fright and closed his eyes. Then as quickly as it came, it left.

I couldn’t get out of that frightful place fast enough. I was so relieved to move.