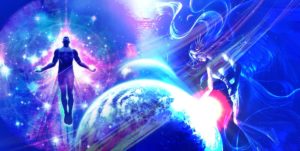 An out of body experience (known as an OBE or OOBE) involves the sensation of floating outside the physical body and traveling through an alternate dimension. It is also often referred to as astral projection, or reported as a near death experience.

While scientists are skeptical about the phenomenon, a survey by OBE expert William Buhlman gathered detailed accounts from more than 16,000 people worldwide who claimed to have had such an experience.

The respondents were asked to describe their experience(s) in detail. The number of recurring features were quite astonishing. For instance:

– 85% heard buzzing, humming or roaring sounds
– 82% felt floating, sinking or spinning sensations
– 72% experienced sleep paralysis
– 56% felt vibrations or high energy sensations
– 24% saw, heard or spoke to a deceased loved one
– 22% saw or felt the presence of an unknown non-physical being

The striking similarities across such a broad range of respondents suggests that OBE phenomena are real. Nonetheless, scientists remain convinced it is just a trick of the brain.

Based on accounts from Robert Monroe (founder of The Monroe Institute) and William Buhlman, OBEs can occur spontaneously or by deliberate intent. It begins with the body in a relaxed state, usually before or after sleeping, or during meditation. The mind must also be calm in order to induce the hypnagogic state.

Once the mind is completely empty, it is theorized that the energy centres of the body (known as chakras) open up so that the spiritual body can expand. This energy release is thought to cause the vibrational phenomena, which many people report as a violent shaking accompanied by loud pulsing or buzzing noises.

At the same time, the body will become paralysed. This happens every night during sleep to stop people from acting out their dreams, and is a perfectly natural state. The only difference during an OBE is that the person becomes aware of it.

The next step is to lift out of the body, either by floating upwards, sinking down through the bed, rolling over, or instantly appearing in a new location using the power of thought alone. Many people reported being pulled or lifted out by helpful non-physical entities.

Once free from the physical body, experienced astral travellers claim to be able to roam free through the non-physical planes – of which there are many. Travellers may encounter deceased friends and family, as well as non-human entities in an array of different forms.

The senses can become heightened during an OBE, with short-sighted people reporting corrected vision and the general ability to read the thoughts and emotions of other entities without actually speaking (known as extra sensory perception or ESP).

Most notable is the ability to observe the physical world in its normal state from a distant location and move instantly through time and space.

The psychologist Susan Blackmore believes that an OBE occurs when a person loses contact with sensory input from the body, while remaining in a conscious state. The illusion of a body is maintained, but perception is no longer derived from the senses.

By this theory, the astral plane is an imagined world based on memories. The realism of the experience is explained by the brain’s ability to create fully convincing realms, similar to dreaming.

While many OBE explorers reject this idea, stating that the astral plane appears far more real than any dream, the phenomena of OBEs remains widely disputed. It is clear that the area needs more rigorous investigation – and that more people should probe their own inner worlds to enhance their understanding of the universe around them.