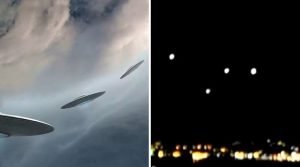 This interesting video was captured by eyewitnesses on August 28, 2021 in Trenton (New Jersey, USA).

Bright spherical UFOs lined up in a triangle over the heads of local residents.

Some of the commentators have suggested that these are the lights of planes approaching, since the airport is located in this direction from the city. Other users disagree with this version.

In their opinion, none of them decreased during this movement. In addition, the “planes” were dangerously close to each other.

Such a risky maneuver would not have been allowed by the airport dispatchers.

What appeared in the sky remains a mystery.