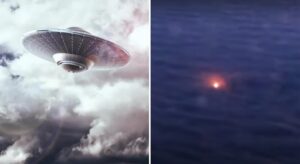 Andrey Chesnokov published a video in which he captured an unusual object, which was below the plane flying at an altitude of 10 km, but above the dense cloud layer. Most likely the UFO was not visible from the ground.

According to Andrey, everything happened on the morning of May 9, 2021. He looked out the porthole and noticed an intense glow below the dense veil of clouds.

The object emitted a pulsating glow at the very edge of the cloud top.

The flight altitude at the time the object was detected was 10100 meters. The clouds below the plane were located at an altitude of about 2 kilometers.

According to an eyewitness, the UFO hung in one place and pulsed with a red-yellow light.

After a few kilometers, he observed a second UFO, located at the same altitude. The second UFO gave off a fainter glow, but also pulsed.

What the eyewitness managed to capture on camera is still a mystery.

Can your life expectancy be determined by a DNA test?