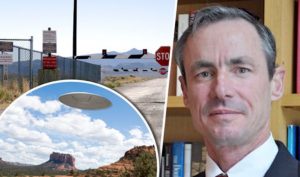 A former U.S. Department of Defense officer said that the presence of UFOs is a problem that everyone should know about. Christopher Mellon claims that in 2014-2015 a special study was conducted that proved the constant presence of UFOs on our planet.

Then the main question arose – why are they here and what exactly are their goals?

Mellon, who took part in a special program dealing with an in-depth solution to such a serious issue, confirmed that Navy pilots have repeatedly seen the incredibly fast movement of UFOs.

They used technologies that are not on Earth. He also added that UFOs made such movements that seem impossible in the physical plane.

The pilot, who said that he nearly crashed into an alien object said, that UFO had the shape of a sphere.

The speed of alien aircraft reached 5-10 thousand miles per hour. Such speeds were observed with the help of an airplane for an hour, and the detected objects could fly at a similar speed for almost the whole day.