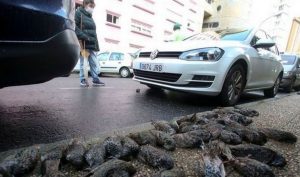 The strange incident took place around 9 a.m. on November 26, 2021 in Ferrol in northwest Spain. Local media reported that about 200 starlings suddenly fell down from the sky, hitting parked cars and bystanders.

Dead birds covered a small area in the Haun Kadon hospital area. The police confirmed that none of the people were injured.

“They flew out of the trees in the hospital’s emergency area, flew a few meters and fell dead on the sidewalk. Now the birds are collected and we are waiting to find out what happened.

“We have already been told that it will not be easy to find out,” says Mapi Rodriguez, president of the local residents’ association. Some dead birds were taken by the Regional Environmental Protection Agency for laboratory analysis, and Ferrol City Council also joined the investigation.

A similar event happened earlier this year in neighboring Tarragona, when hundreds of birds fell from the sky. It was then concluded that toxic chemicals released by a petrochemical plant in the area were to blame.

Starlings are known to fly in large, synchronized groups, so if the cause of the Ferrol mass deaths were of a similar nature, the number of birds that fell would make sense, but the cause of the incident has not yet been specified.

There are rumors in local media that they were electrocuted on a nearby power line, but this has not been confirmed. The hospital itself is located on the banks of the Ria de Ferrol, which flows into the Bay of Biscay.

There is a university, a supermarket and many residential buildings near the hospital, but there is definitely nothing that could throw dangerous chemicals into the sky.