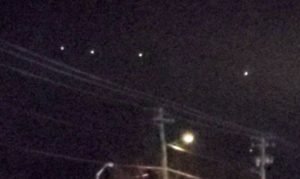 A mysterious group of several glowing spheres silently and slowly flew along a busy road in Illinois near Lake Michigan before the glow of the balls began to fade and eventually disappeared into the night sky.

This video (see below) was filmed on November 26, 2021 at approximately 6 p.m. According to an eyewitness, the objects moved completely silently and, changing formation, moved towards Lake Michigan.

Initially, a “triangle” of three shining spheres was seen in the sky, and then it broke up and more spheres appeared moving in the dark sky.

Earlier, UFOs were repeatedly spotted in the Lake Michigan area, which is why American ufologists have a theory that the deep cold waters of the lake may hide an alien base.

As for this video, initially skeptics began to say that Elon Musk’s satellites got on the video, and then a version appeared that the shining spheres were actually helicopters with searchlights.

In turn, political scientist Thomas Wawrusko suggested that the video could have captured the flight of the secret US aircraft TR-3B.

The TR-3B is an as yet unconfirmed “black project” by the US Air Force, allegedly created by the advanced weapons laboratory DARPA.