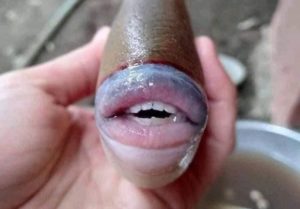 A fish with human-like figures such as teeth and a mouth was found and photographed in Malaysian waters.

Upon sharing this photo via a Twitter user garnered many reactions, comments and likes. Many in the comments section puzzled over the fish and marvelled at its teeth.

The viral pic of the critter, which was reportedly caught in Malaysia, was uploaded July 2 by an Indonesian Twitter user with the caption “her lips are hotter than mine.”

Indeed, the photo shows the fish sporting “sultry” soup coolers that are almost identical to an Instagram star’s filler-injected pout. The resemblance is so uncanny that many Twitter users wondered if the viral pic was fake.

Triggerfish, found mainly in tropical and subtropical reefs, are well-known for being highly territorial and will attack divers and snorkellers if they swim near their nests.

Both the picasso and titan triggerfish are notorious for viciously defending their eggs and nests against intruders, including scuba divers and snorkellers.

So yes, this fish is real.