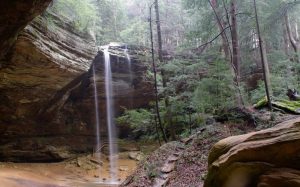 Danny Hopkins and girlfriend Ciera had been to Hocking Hills State Park in Ohio before. It’s a fantastic place with caves, waterfalls, creeks and many trails to hike.

It was a warm sunny late Summer day, the perfect time for a visit to the park. The couple arrived at Hocking Hills with the intention of hiking a familiar trail which they particularly enjoyed.

Heavy recent Summer Rains however had washed out the trail, but they found another nearby and set off on their hike.

The chosen trail seemed to be a popular one as the couple passed several hikers as they moved along the trail. After hiking for about a half hour the two came upon a ranger fire tower.

It was a strange sight, the tower had boarded up windows and an overall grimy appearance, but it was the horrible smell and swarming flies that bothered the couple the most.

As they slowly moved past the fire tower they felt as if they had entered a walk in cooler as the summer heat seemed to plummet, both also noticed that they were in total silence and there was no sign of any other hikers.

Continuing on the trail the two, now well past the strange tower and back in the Summer heat, decided to take a short break. Danny took out his phone to check GPS to get their exact location.

His phone was dead even though he had fully charged it before leaving home. Ciera then checked her phone only to find that her batteries were also dead.

The couple wanted to take another trail back to the parking area of Hocking Hills and avoid the strange tower, but with no GPS to guide them they decided to take the same trail back. Within a few minutes they were back at the tower, but everything was very different.

The tower itself appeared fairly new and in good condition. The windows were no longer boarded up and there was no repugnant smell or flies swarming and the Summer air was warm. They were sure they were still on the same path, after all, they had never left it.As they neared the parking area Ciera was the first to notice that it appeared to be getting dark.

They began their hike at about noon and could not have been on the trail for more than an hour, and Danny’s watch indicated that they were in fact hiking for about an hour, but when they checked the clock in their car they found that they had been gone for nearly six hours.

Danny and Ciera returned to Hocking Hills about a week later and went to the fire tower, it appeared to be in fine shape just as they had last seen it. What the couple appears to have seen was a tower from the past which was badly damaged when fire swept thru the park many years earlier and was later rebuilt.

A time slip is a paranormal phenomenon in which an individual or a group of individuals allegedly travels through time, thereby witnessing events in the past. They can also be referred to as “dimensional anomalies.”

The difference between a time slip and other alleged time travel phenomena isn’t hard and fast, but typically a time slip allows travel without any kind of time machine or other obvious mechanism or cause, and it is usually only for a short period of time.