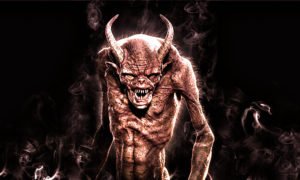 Anomalien.com reader his story about an encounter with the unexplainable.

In 1984, near Port Townsend Washington, I was single and lived alone in one side of a rented duplex. The rent was low and I didn’t have a lot of bills, but it was still a struggle at times to pay them and have enough to eat. My job was within walking distance of my house, and if I wanted to go into town I could hop the local bus.

Thanks to an excellent route, non-drivers like myself could pretty much get anywhere they needed to go without having to depend on someone else to take them. You still can.

While living there, I met “Michael”. Although I didn’t know him very well, I liked him, and enjoyed talking with him. He had many health problems, both emotional and physical, but he was determined to overcome them.

Michael had been in Viet Nam. I don’t know where he was stationed, or how many tours of duty he had gone through, but it was my understanding he had been injured by Agent Orange, and he also suffered from Post Traumatic Stress Syndrome. If memory serves, I believe he had also injured his back or something, which required pain medication to help with the chronic pain.

I just flat-out LIKED Michael. When he came into the dining room where I worked for lunch or just to have some coffee, I was usually happy to see him, and would sit and talk with him if I was on a break. I found him interesting to talk with, and I tried to encourage him to keep working on his health recovery efforts when he would talk about it.

But…I wasn’t ALWAYS glad to see Michael…it was nothing he was doing; he was never once anything other than friendly and pleasant to me…but sometimes, when he would come into the room, I couldn’t stay in there with him – I would have to leave.

This wouldn’t happen very often, but it was all I could do at times not to RUN away from him. Sometimes, this would happen when we had been talking for a while, and it even happened a couple of times when one of us was in the middle of a sentence. I would suddenly say, ‘I’m sorry, I HAVE to go now…” Michael always seemed to understand my odd behavior…

The cause for my abrupt departures? Michael wasn’t always alone. On his right shoulder, riding there, perched securely with clutching toes and fingers grasped tightly to his collar and his hair, Michael often carried a hideous passenger. I thought of it as a demon – it could not have been anything else.

When I tell this story, the first thing people demand to know is, ‘what did it LOOK like?’ You’re probably wondering the same thing as I write this, so here is the description:

It was hairless and naked, about the size of a Chihuahua, in fact looking to me like a hideous cross between a Chihuahua and a bat, with some human characteristics. It had huge ears, long narrow eyes, a pushed in nose, and yellowed, very sharp pointed teeth.

Its arms and legs were very thin, with long fingers and toes, and it had a pot belly. It crouched on Michael’s shoulder, clinging to him, laughing and chattering and whispering into his right ear. Oddly enough, I couldn’t HEAR the monster (for which I was grateful) – I could only see it. Apparently it’s words and chatter were meant to be heard by Michael alone.

Michael never acknowledged the creature when it was there. He never faltered in his speech, nor looked startled when it would suddenly climb up his back and settle itself on his shoulder; he didn’t look relieved nor seem any happier when it apparently wasn’t with him at all.

It was as if to Michael’s mind, the demon was so ordinary, so inescapable, so much an accustomed burden, a part of his life, it wasn’t anything to refer to. He never tilted his head towards or away from it’s chatter in his ear, it’s laughter. He never glanced over to look at it.

Michael knew, however, that I knew it was there, and when. He knew exactly what I was referring to when one day, I said to him, “I want you to know that when I do that, (leave suddenly) it’s not you.”

Michael had a girlfriend, ‘Sarah’. I became acquainted with Sarah separately from Michael – I liked her very much also. One day we started talking about Michael, and I mentioned his ‘passenger.’

To my quiet horror, Sarah told me that when Michael was younger, he had apparently been in a motorcycle gang. The ‘leader’ was fascinated with the occult and Satanism, and he began performing ceremonies, etc., with Michael and the others participating, even when they were unwilling to do so.

Sarah explained that to her understanding, one night the leader held a ceremony with the other members present to call up demons. The demons came, but the leader had neglected to learn how to send them BACK before summoning them, and so could not banish them. Not long after this horrific event, several members, including the leader, DIED.

And Michael had his passenger.

It’s been many years since I knew Michael – a long time since I’ve heard Sarah’s explanation for the horror that was attached to him. I don’t know why I could see the demon – I couldn’t see it as clearly as I normally do – it was as if my physical sight and the sight of my mind’s eye coordinated to show me the monster.

But there was no doubt I could see it – it was there. It only seemed to be aware of Michael; it never looked at me, nor acknowledged anything or anyone other than it’s ‘host’ as it laughed and chattered and clung tightly with its long bony clawed fingers and toes.

I don’t tell this story very often — just typing it out here, my stomach is twisting a bit. But since these events, whenever someone scoffs and insists that the paranormal, and all its inhabitants aren’t real, don’t exist, aren’t possible, I think of Michael’s demon. You Can’t Tell Me There’s ‘No Such Thing’.