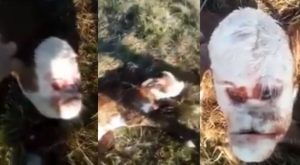 A farmer from Argentina could not believe his eyes when one of his cows gave birth to an ugly calf, whose face was horribly reminiscent of a human face.

The strange mutant was born on a farm in the village of Villa Ana, Santa Fe province, and was filmed by the owner of a herd who cannot recover from shock and says he has never seen anything like it before.

The eyes are not set on the sides of the muzzle, like cows, but close to each other, like primates. The calf’s face is also very short, and the mouth is distorted.

The mutant calf lived only a few hours and in the video he was probably barely alive.

An Argentinean geneticist commented that he did not know exactly what disease could cause such an ugliness.

It is not known whether the body of the mutant calf was delivered to veterinarians to determine the cause of deformity and death.