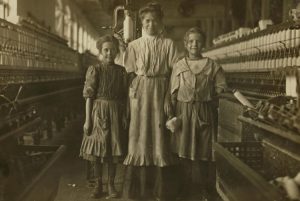 On February 15th, 1787 a worker in a cotton mill in the town of Hodder Bridge, Lancashire, in England, dropped a living mouse down a workmates dress in the time-honored tradition of making a woman freak out.

Unexpectedly, the victim of the prank immediately went into a convulsive fit that lasted for about 24 hours. The following day, three more girls had similar fits. The panic spread, and all work at the mill came to a halt.

By Monday morning no less than 24 people were affected – 21 young women, two girls aged about 10 and a man. Some attacks were as short as 15 minutes, while some lasted over a day. The fits were extremely violent and the victims had to be restrained from ripping their hair out, or dashing their brains out against the walls.

The mouse was now forgotten, and suspicion was directed towards a recent cotton shipment – was it carrying a disease, perhaps even the dreaded plague?

Dr. St Clare was summoned from Preston and found that a sharp shock from his electric machine immediately ended the convulsions. The outbreak stopped once the people knew the ailment was hysteria and no actual disease was involved. By Wednesday, the mill was up and running once again.

Such outbreaks of mass psychogenic illness are infrequent, but at least 16 other cases have been documented from workplaces in Europe, America and Asia. In most instances the victims have convulsions, but in some cases have physical symptoms, such as skin infections.

The Witches Of Whitewater And The Legend Of The Evil Book