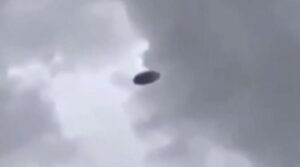 An unidentified dark disc-shaped aircraft was captured by an eyewitness on video on August 7, 2021 over Manhattan (New York, USA).

This video was published by the well-known ufological portal Mutual UFO Network (MUFON). This dark ship was captured on August 7, 2021 over Manhattan.

The famous Taiwanese ufologist Scott Waring did not miss the chance to comment on this anomalous phenomenon.

Initially, the ufologist decided that this was an ordinary smoke ring, but after looking closely, he rejected this hypothesis.

Then Scott suggested that it could be a dark cloud, carried away by a stream of wind, but in the 57th second of the video, the object rushes upward with lightning speed and disappears behind the clouds.

An eyewitness, puzzled by the incredible picture, sent the video to ufologists for careful study.

Scott Waring is sure that it was a real alien ship, having a disc-shaped shape and a black smoky coating. The UFO, according to the ufologist, observed people from above.

A report from the US task force dedicated to investigating UFOs — or, in the official jargon, UAPs (Unidentified Aerial Phenomena) — has neither confirmed nor rejected the idea such sightings could indicate alien visits to Earth.

Watch: Dozens of UFOs in Earth orbit during the launch of the James Webb Telescope