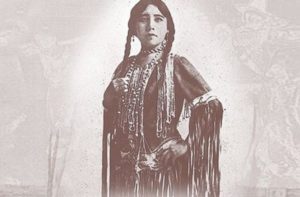 Lost Bird of Wounded Knee was a baby of just 4 months of age, when, on the 29th of December 1890, at the Wounded Knee Creek on the Pine Ridge Reservation, hundreds of Lakota men, women and children died in a confrontation with U.S. troops, in an incident that became known as the Wounded Knee Massacre.

By the time the massacre was over, between 250 and 300 men, women, and children of the Lakota had been killed, and 25 US soldiers also died.

Lost Bird’s mother was mortally wounded, but she managed to find some scanty shelter from the bitter cold and wind in the bank of a creek before succumbing to her injuries. On the fourth day after the massacre, when a US Army detail went out to bury the dead, the baby was found under a covering of snow, still tied and protected on her frozen mother’s back.

Without knowledge of the child’s identity or Lakota birth name, she was called Zintkala Nuni “Lost Bird”.

Lost Bird ended up being adopted by General Leonard Colby and, without her knowledge or consent, his suffragist wife, Clara Bewick Colby. He legally adopted her on January 19, 1890, naming her Margaret Elizabeth Colby.

However, wife Clara continued calling her Zintka, and though Zintka’s adoption was a surprise to her, Clara Colby took on the duties of motherhood in addition to her work as a suffragette activist, lecturer, publisher and writer, and grew to love the child as her own.

However, Zintka’s childhood was marred by her exposure to racism, abuse from adoptive relatives and the indifference of her father. Things took a drastic turn for the worse when General Colby abandoned his wife for the child’s nursemaid and failed to provide adequate support for Clara Colby and Zintka.

Zintka was to endure miserable stays with relatives she barely knew and boarding schools and became harder and harder for her mother to control, and at the age of 17, she was sent back to her father and his new wife Beatrice. The result was disastrous.

A few months later, General Colby placed his now-pregnant daughter in a stark and severe reformatory. Her son was stillborn, but Zintka remained in the facility for a year. Although the father of the child was unknown, historians suspect Zintka was sexually abused by General Colby.

She eventually returned home to her adopted mother, and seemed to have found some degree of happiness in marriage, but the relationship disintegrated when she discovered her new husband had given her syphilis, then incurable. She struggled with the effects of the illness for the rest of her life. 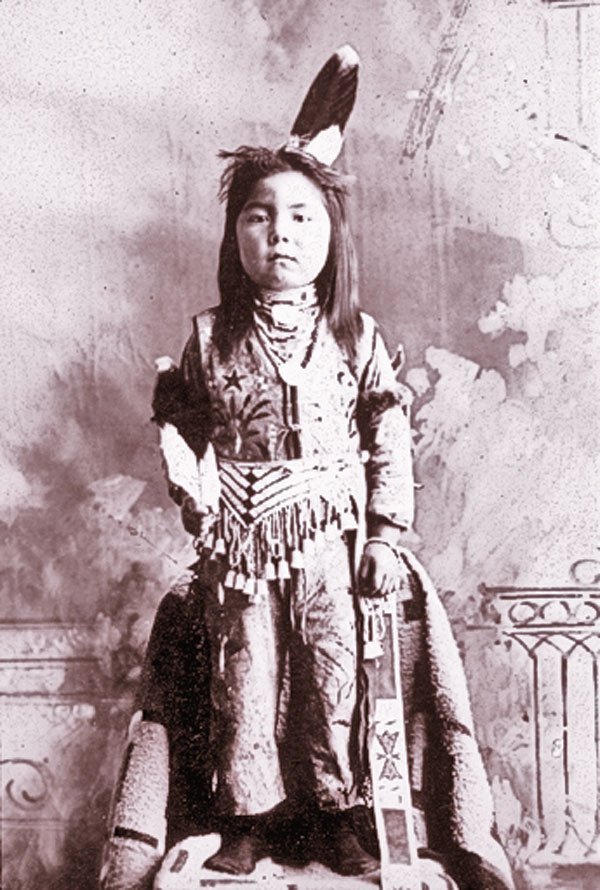 She had a number of careers during her short life including working with Buffalo Bill’s Wild West Show, various entertainment and acting jobs, and possibly prostitution. Three times, she managed to visit South Dakota in search of her roots, but her welcome was cooly received.

By 1916, Zintka was living in abject poverty. She and her then-husband, himself in poor health were trying to make a living in vaudeville. She had had two more children. One died, probably that year, and Zintka gave the other to an Indian woman who was better able to care for him. Later that year, she lost her loving adopted mother, Clara Colby, to pneumonia.

Eventually, Zintka and her husband left vaudeville and moved in with his parents in Hanford, California, but in 1918, Zintka fell ill on February 9th, 1920, as an influenza epidemic swept across the nation. On February 14th, Valentine’s Day, she died at the age of 29. She was buried in a pauper’s grave in Hanford.

Clara Colby had tried to raise Zintka as a white girl and tried to erase her unceasing attraction to her Lakota culture. In the end, Zintka was rejected by both cultures, and went on to only to endure a life of racism, abuse and poverty.

Lost Bird finally went home in 1991, in an effort spurred in part by author Renee Sansom Flood, author of “Lost Bird of Wounded Knee: Spirit of the Lakota.”

Her grave was found in California and her remains were returned to South Dakota, and on July 11th 1991, a ceremony led by Arvol Looking Horse was held at Wounded Knee, to inter the transferred remains of Zintkala Nuni near the mass grave of her Lakota family.

In her honour, the Lost Bird Society was created to help those Native Americans who were adopted outside their culture to recover their heritage.

Paganism, Wicca and Witchcraft: How Are They Different?