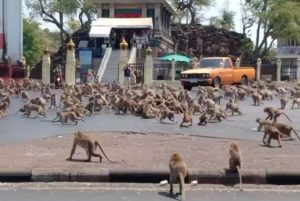 Terrorist groups in the form of brutal macaques are keeping the entire town of Lop Buri in fear in Thailand. As it turned out, at the expense of tourists, not only people lived here, but also animals: as soon as the monkeys stopped receiving “treats”, they decided to “protest”.

The behavior of the monkeys is so out of control that neither the police nor special organizations can handle them. The officers called the situation hopeless.

In order to somehow calm the primates, local residents began to give food, moreover, not the most useful one. As a result, the situation only got worse: unhealthy food became the reason for even more aggressiveness, reduced fur length, faster reproduction and lack of fear of people.

According to some estimates, about eight thousand macaques run around the city. An abandoned cinema became their main habitat. The aggressive group does not allow local people to go out into the streets: they are afraid for their lives.

The monkeys’ hyperactivity caused by soda, cereals and sweets became uncontrollable. Humans began to live in a cage, while primates began to live outside.

Monkeys’ excrement is scattered throughout the city. They stink terribly, especially when it rains.

The authorities began to neuter the animals. Already 300 monkeys have received a vasectomy, 200 creatures are next in line. Some people point out that creatures lived in the territory before humans, so that people should adapt to them, and not vice versa.

There is some truth in this, but it is difficult to live normally, when at any moment you can be bitten by an inadequate monkey.