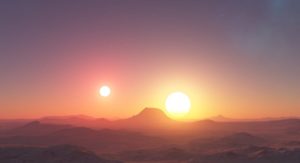 Astronomers have established that 70 thousand years ago, ancient people could observe two luminaries in the sky at the same time. In those days, the Neanderthals who were on the verge of extinction lived on Earth.

The second star was the star Scholz (WISE 0720-0846), which 70 thousand years ago approached our solar system.

Scholz’s star is a red dwarf with a mass equal to eight percent of the mass of our star. The celestial body got its name in honor of the discoverer – Ralph-Dieter Scholz, who discovered it in 2013, and since then scientists around the world have been actively studying it.

The light emitted by the “second star” was comparable in brightness to the light of the moon during the full moon. When viewed from Earth, the dimensions of Scholz’s star and the Moon were approximately the same. Several thousand years later, the Sun and Scholz’s star flew in different directions.

Researchers believe that about 70 thousand years ago, humanity was on the verge of extinction. However, scientists do not associate it with the Scholz star, which approached at that time. An interesting coincidence, but more research is needed anyway to find out for sure.

Galaxies in the Universe are in continuous motion and move at high speed. Sometimes it happens that the stars at some “moment” are in close proximity to each other.

According to the calculations of astronomers, approximately once every 100 thousand years, our star approaches other stars. In rare cases, collisions are inevitable, leading to the death of stellar systems.

However, according to scientists’ calculations, such a sad scenario will not threaten us in the next millions of years.