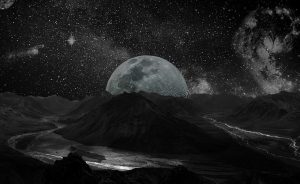 The moon might seem pretty obvious. Just look up and there it is! Yet, we often take this little satellite for granted.

Here are 7 things you may not know about our nearest cosmic neighbor.

1. THERE IS NO DARK SIDE OF THE MOON

Part of the moon is always in the dark; just not the same part all of the time.

2. GOLF WAS PLAYED ON THE MOON

During the Apollo 14 mission, astronaut Alan Shepard swung a makeshift golf club on the lunar surface. He missed the ball the first time, but on the second try it went flying!

You may know a blue moon as the second of two full moons occurring within the same month, but there actually was a blue colored moon at one time.

When the Krakatoa volcano erupted in 1883, it created so much ash in the atmosphere, the moon appeared as blue—for almost two years!

4. THE MOON OFTEN HAS “EARTHQUAKES.”

Of course we can’t call them earthquakes, but the moon has similar seismic occurrences due it structure. Since it has a crust, mantle and core (like earth), it is subject to disturbances or “moonquakes.”

Although the moon appears perfectly round in the sky from our perspective, it really isn’t. According to NASA, it is actually egg shaped, with the larger end pointing towards us.

6. THE MOON WAS USED FOR BIRTH CONTROL

During the 1950s, Czech doctor Eugene Jonas developed a family planning method based on information contained within ancient Assyrian texts that stated women’s fertility coincided with the various phases of the moon. Wow, lunar birth control!

You probably already know that the word lunatic has to do with the moon and we all get a little off kilter when the moon is full.

But you may not know that in 18th century England, murderers could ask for leniency if they committed their crimes during a full moon.