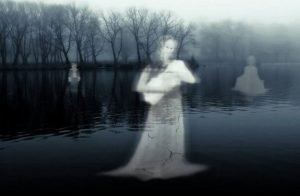 Lac Long Quan’s story is perhaps the most intriguing of all the myths and legends of Southeast Asia, for it apparently tells the story of how the Vietnamese people came to be. It’s said that dragon blood flowed through Lac Long Quan’s veins—the Dragon Lord and second Hùng king of the Hồng Bàng Dynasty of ancient Vietnam. He would take on sea monsters and all manner of enemy to keep his people safe.

In fact, all his countrymen had to do was call his name or “Father” and he would appear to help them. He spent much of his life in such a manner until finally, one thing alone stopped him in his tracks: the incredibly beautiful Au Co—an immortal mountain fairy. The Dragon Lord, Lac Long Quan was enamoured of her and so he married her immediately. Just a short while later, she produced a large sac of eggs, which grew larger and larger until on the seventh day it was so big that it burst and 100 children were born (each bearing one of the 100 Vietnamese family names) to the dragon lord and his fairy wife.

At first, this new royal family lived in harmony, but this was no regular king. No, he was of course a dragon, and so he needed to live by water, and the beautiful Au Co missed her ancestral mountain home so much that she craved to return. So it was that Lac Long Quan took 50 of the children and moved seawards, where he taught them the necessary skills to survive—how to fish, how to sew and cook rice and how to wear tattoos to scare away sea monsters. Au Co, however took the other 50 children and moved high into the highlands, where she taught them to raise animals, grow fruit trees and to build homes out of sturdy bamboo stilts. The couple lived forever separately, but together they watched over their beloved country. The stories of the suns and daughters that followed explain the rise of Vietnam and the beginnings of the Vietnamese people as they are today.

Legend of Nak of Phra Khanong of Thailand

This legend tells the story of a pregnant woman by the name of Nak. She was deeply in love with her husband Mak, who was sent away to war, and while he was gone, Nak and her unborn child died. A tragedy to be sure but when Mak returned home he found his wife and child alive and well, and they lived together happily for some time, before he eventually realised, through a mixture of neighbourly rumours and strange occurrences at home, that he was living with ghosts. Mak eventually fled and took refuge in a temple (a holy ground that is off-limits to supernatural entities such as ghosts) which enraged Nak so much that she haunted the region of Phra Khanong, until she was eventually captured by an exorcist who imprisoned her spirit in an earthenware jar and tossed it into the river.

From there the legend branches off into many different endings as these things often do. Some say that she was released after being fished out of the river accidentally, while others speak of a monk—the famous Somdej Toh no less—who recaptured the soul and trapped it inside the skeletal remains of Nak’s own body and wore it as a wrist band, and later passed it on for safe keeping to the Royal Family of Thailand.

However, if you prefer a happy ending, then this variation might be for you: Somdej Toh is said to have captured Nak and convinced her that all would be well when reincarnated, and she could join Mak again in her future life, and so so she left this world in peace. To this day people still visit the shrine which was created in Phra Khanong, Bangkok to ask the spirit for favours such as successful births, and that their husband be left at home—not forced into military service. To visit the shrine go to: Mae Nak Shrine, Wat Mahabut. Phra Khanong, Sukhumvit Soi 77.

The Origin of Singapura

Sang Nila Utama was once the ruler of the Srivijaya Empire. Late in the 13th century, he discovered an island named Temasik with beautiful white sandy shores. Sang Nila Utama decided that he would cross the waters to reach this beautiful land. However, as he did so, a fearsome storm descended upon him and his party, nearly capsizing the boat. In desperation, Sang Nila Utama threw his crown into the turbulent waters and magically, the weather and the sea became calm, and the crew reached Teluk Belanga (present day Telok Blangah) safely.

Shortly after landing, the king spotted a strange beast, which they reasoned to be a lion (although it’s since been proven that there were no lions and so it is more likely to have been a tiger). This overjoyed Sang Nila Utama who decided to name the island after this symbol. And so the Lion City, or Singapura was born. Sang Nila Utama went on to rule Singapura for 48 years from the year AD1297 before his death. To catch a glimpse of this legend in Singapore, you can visit Fort Canning Hill which is said to be the location of both Sang Nila Utama’s palace and burial ground.

The Ap (Cambodia) and The Krasue (Thailand)

This gory old ghost story is told in many different ways and there are almost identical versions in both Cambodia and Thailand. The tale begins when a beautiful young woman walks outside her house at night. As she walks, she notices a mysterious red glow in the air, and she walks toward it only to be confronted with the ghastly floating head of a beautiful young woman. Below the head, the ghost is a mess of entrails—spine and bloody organs hanging from the neck down. The beautiful woman screams but alas, it’s already too late. This particular Southeast Asian myth, may sound bizarre but it’s a persistent legend throughout both Cambodia and Thailand.

How this neatly floating head came to be is debatable but the most enduring version of the myth states that women who abuse black magic may be forced to turn into an Ap or a Krasue as a penalty for their wicked ways. The strange dark practices of the Ap don’t stop there though; she’s said to feed on blood and foetuses and many say is particularly interested in imbibing the innards of pregnant women. Legend goes on to state that the Ap can be repelled if you put thorny vines outside your house, as the dangly heads with equally dangly entrails may get caught in them. There are two ways that you can become an Ap or Krasue—by straying down the dark path of black magic, or the Ap herself can turn you into one by having you ingest her saliva. If she offers you a glass of water, or a quick kiss, we suggest turning her down…as politely as you can.

The Origin Of Garlic (Philippines)

There once lived a beautiful young girl whose mother arranged a betrothment to the son of one of the richest people in the land. The problem was that the girl was said to be so beautiful that a rival suitor murdered her fiancé. And as we all know, murder snowballs and that rival was, in turn, killed by the dead fiancé’s exceptionally loyal slave. As news of these deaths spread throughout the land, the young maiden ran up a sacred mountain and screamed to the heavens—directly to Bathala (in ancient Tagalog theology, Bathala is said to be the creator of the universe) to take her away so that her beautiful face will cause no further deaths. Thus, her selflessness is recognised by Bathala who struck her with lightning. Her body is retrieved by her mother who buried her and cried by her grave, watering the grave with tears.

A short while later, the mother, tending to the grave saw some grass-like plants sprouting on top of her dead daughter’s final resting place. Thinking it was some useless weed, the mother decided to pull it out and to her astonishment, she sees seeds that look bizarrely like her dead daughter’s teeth. Then, as though the heavens themselves have opened, she hears a supernatural voice boom: “Those are your daughter’s teeth.” The mother then gave thanks, knowing this is Bathala’s way of giving her something that will remind her of her daughter and she planted the seeds all over her land to help spread the memory of her beautiful, tragic daughter. And what was to grow from these seeds? Garlic.

The ‘pontianak’ is a vampiric creature in Malay and Indonesian folklore, said to be the spirit of women who died while giving birth. They are said to take on the appearance of beautiful, pale-skinned women with long hair and are always clothed in white. It’s among the most popular folklore told in both countries, inspiring several films and even the name of the city of Pontianak in Indonesia.

This was due to claims that the first sultan of the city was haunted by the creature. The pontianak is said to be nearby if a baby cries softly or a dog is whining; its presence is marked with the sudden whiff of a floral-based fragrance, followed by a horrible stench.

At the heart of this story is a beautiful fairy princess who lived up the Mount Ophir (more commonly known by its Malay name, ‘Gunung Ledang’) and who swore to never take a husband. However, making such an oath could only attract the unwanted attentions of powerful men. According to the legend of the Princess of Gunung Ledang, the Raja of Melaka, already married to both the Princess of Java and the Princess of China, decided that he wanted to take a wife quite unlike any other.

A wife of the like that no other King or Prince possesses. He decided that he wanted the fairy princess’s hand in marriage and so he dispatched a group of his finest warriors including his finest warrior, Hang Tuah to the mountain to deliver his proposal. Upon arrival, strong winds, singing bamboos and clouds close enough to touch attempted to prevent them from going any further. However, one of the warriors, Tum Mamat made it through these obstacles, eventually reaching a beautiful, lush garden where he found four women, to whom he delivered the Raja’s proposal.

However, all four women quickly vanished into thin air. Later that night, a withered old woman appeared before him and demanded that the Raja make for his would-be bride. both a bridge of gold and a bridge of silver, which would stretch from Melaka to Gunung Ledang. Also requested was a collection of gifts: seven trays of mosquito hearts, seven trays of mite hearts, seven barrels of beetlenut juice from dried Areca nuts, seven barrels filled with virgin maiden tears and a bowl containing the blood of the Raja’s son. Clearly, the princess did not want to marry him. The Raja informed them that he was able to meet all but one of her requests—that he would not give the blood of his son. This version of the tale ends abruptly suggesting that the fairy princess fled to the mountain, where she continues to live in a hidden cave, to this day. However, there are numerous versions, where some state that the two do marry, in others the princess has an army of sisters and in one, the princess is even said to be the Raja’s own daughter.