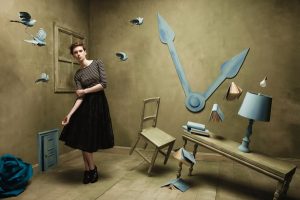 Kate Hudson stated (and not for the first time) that she has a sort of sixth sense, along with her mother Goldie Hawn.

Hudson revealed Alan Carr on his Channel 4 chat show that she once saw the “creepy ghost of a woman with no face”, and explained: “It is not really seeing, it is feeling a spirit. A fifth energy. I believe in energy. I believe our brains can manifest into visual things.”

While promoting horror flick The Skeleton Key back in 2005, Hudson also suggested that she saw the spirit of her deceased grandmother at the foot of her bed. But she’s not the only celebrity to claim to have the power of another sense or a strong connection with the spiritual world.

Here are seven more stars to have professed spooky powers or recalled a similar, otherworldly encounter.

Ritchie Neville claimed to have a sixth sense after he was able to detect girlfriend Natasha Hamilton’s pregnancy solely through his sense of smell.

The 5ive singer, who is expecting his first child with the Atomic Kitten star, revealed on ITV’s Lorraine: “I’ve got a little theory because I leant in [to kiss her] and I said, ‘Have you used any baby lotion or something?’

“And she said, ‘No why would I use that?’ I said, ‘Just in here [your neck] you smell like newborn babies.’ She looked at me and I looked at her and said, ‘You’re not [pregnant], are you? You couldn’t be?’ It turned out she was!”

Claire from Steps has revealed she feels a supernatural connection with the late, great Elvis Presley, as she was born on the day that he died. The singer shared the admission in her biography and also during an interview with DS, explaining: “I do, and I know a lot of people think I’m mad because of it.

“People argue as well because he died on the 16th [August] and I was born on the 17th, but my theory behind it is I was born at half past one in the morning here, so in America it was still the 16th, that’s my reasoning! I don’t know, there’s something. It’s something I like to think about because it gives me confidence.”

Recent CBB winner Gary Busey claimed while he was on the show that he had an otherworldly encounter with the late Patrick Swayze on a bench near his Hollywood home.

The actor told surprised housemates: “[Patrick Swayze] came through me the other day. I’ve been to the other side, after my death… so I have a connection to that spiritual world.”

From channelling spirits to startling encounters – Kesha took it one step further as she alleged she went to “the bone zone” with one inquisitive spirit who paid the singer a bedroom visit.

Speaking to Conan O’Brien, she revealed: “I did go to the bone zone with a ghost. I don’t know his name but he was in my house.”

She then claimed the ghost caressed her, adding: “It was a sexy time, it wasn’t like sex.”

The Church of Scientology is alleged to believe that its long-running member Tom Cruise has both telekinetic and telepathic powers.

Cruise has been part of the controversial church for more than 30 years, which means he may have reached the organisation’s level of Operating Thetan. According to Rolling Stone journalist Janet Reitman, “OTs can allegedly move inanimate objects with their minds, leave their bodies at will and telepathically communicate with, and control the behaviour of, both animals and human beings”.

The actor is said to have reached an advanced stage of OT, with Reitman adding: “At the highest levels, they are allegedly liberated from the physical universe, to the point where they can psychically control what Scientologists call MEST: Matter, Energy, Space and Time.

6. Is Lady Gaga a Ghostbuster?

It’s been reported that Lady Gaga is “so in tune with the spiritual world” that she once organised a séance on tour to banish a “bad omen”.

It was later claimed she even splashed out on a ‘Ghostbuster’ machine to perform a “spirit-seeking sweep” of a venue during a world tour.

And on her spooky, spirit-sensing machine, the owner of the firm who apparently sold the equipment to the star, revealed: “Her aide said the gear had to be robust as they were taking it on the road, so they must be doing this everywhere Lady Gaga is performing.”

Miley Cyrus claims she had a premonition that something frightening and otherworldly was about to happen during her stay with her family at a former bakery in London’s Knightsbridge a few years ago.

The singer revealed to Elle magazine that after strange dreams and premonitions, she heard her sister screaming as she was scalded in the shower after the hot water tap had mysteriously turned itself on.

She explained: “[Sister Noah] was standing in the shower and all of a sudden I hear her scream. The water had somehow flipped to hot but it was still… It wasn’t like the water had just changed, the knob had turned but she hadn’t turned it and it was burning her. She was really red.”

The star continued that she even saw a spirit of a young child, adding: “Before I felt this, I thought I had seen a little boy sitting on the sink watching me take a shower so I felt really freaked out.”

The Gruesome Story of Carl Tanzler and His Corpse Bride