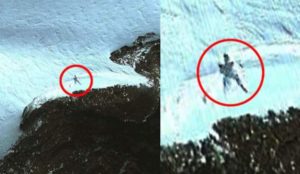 The world-famous virtual archaeologist Scott Waring discovered an incredibly large silhouette of humanoid in one of the images of Antarctica. It is located next to the entrance to a huge cave, which was captured by a satellite and displayed on the Google Earth map.

The mysterious creature has been poorly studied so far, but according to preliminary estimates, it becomes clear that its height reaches about 65-foot.

At the same time, the entrance to the cave, which is located nearby, is slightly higher and is about 75 feet. This option is a great place for such a large creature to live because it can easily enter the cave.

The photo itself and Scott Waring’s assumptions were posted on the Internet, where they immediately went viral. A huge number of users began to express their opinions on this matter, but they were divided.

Of course, it was not without the intervention of skeptics who are sure that there is some kind of shadow or a huge block of ice in the photo, but definitely not a giant creature.

What did Scott Waring actually discover?