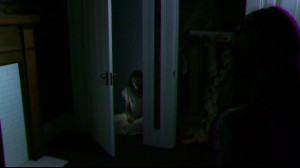 When looking for a place to live do you want a good location, a nice view, or for the walls to convulsively sob as the stairs scream each time you step on them? Well, if it is the last one—either because you are a big fan of “Ghostbusters,” “Ghost Hunters,” and maybe “Space Ghost” or because you like constantly shouting “What the hell was that?!” at three in the morning—then do we have some great real estate listings for you to check out.

Featured in the Travel Channel’s “Ghost Adventures,” the SyFy Channel’s “Ghost Hunters,” and maybe Nick Jr.’s “Casper the Ghost Most Grisly Hauntings” (if only the channel would pick up such a show), the Ashmore Estates in Illinois is a former ramshackle farm turned questionable psychiatric hospital turned vandalized ruins turned commercial haunted house, a very similar trajectory followed by most of Donald Trump’s holdings.

Naturally, moving into a house that might hold a rusty backhoe, a sputtering electroshock machine, graffiti of penises, and one of those spring-loaded witches that pop out to scare amusement park visitors may not be your cup of tea.

But if you don’t move here you’ll be missing out on free-floating black mists, full-body apparitions, the sounds of long-ago pagan rituals, the ghost of a mental healthcare doctor who jumped out a window (a common occurrence in the days before elevators or stairs), and the spirit of Elva Skinner, a girl who is said to still haunt the place, most likely as revenge for her name. Plus, you’ll get to tell friends you live in a “psychiatric damaged farm haunted theme house,” which will either be greeted with “Cool!” or “Call me when it also has a bar.”

As one of the few homes actually listed by the U.S. Commerce Department as being haunted (thanks to a rigorous exam that probably includes such comments as “Felt kinda chilly near the open window” and “Rocking chair wouldn’t stop moving when I sat on it”), the Winchester House in San Jose, California was actually built as a haven for ghosts.

Commissioned by Sarah Winchester either as means of communicating with her deceased daughter and husband or to appease the spirits of all those killed by the rifles that bear her surname, the Winchester House was built every day non-stop from 1884 up until Winchester’s death in 1922, at which point the contractors realized the checks were no longer coming and they’d have to now get drunk on weekday afternoons while supposedly repairing someone else’s house.

But one woman’s paranormal nightmare can be your dream home, so long as you like stumbling upon—and getting hopelessly lost in—secret passageways, twisting hallways, and a special séance room…along with 40 haunted bedrooms, 47 haunted chimneys, two haunted ballrooms, two haunted basements (perhaps due to a parallel dimension) and overall 140 rooms in which to spend your days saying “Where am I?” and your nights screaming “WHERE ARE YOU TAKING ME?!”

The inspiration for a bestselling horror book and nine horror movies (eight of which might have been relabeled “Leprechaun” VHS tapes) the Amityville Horror House was eventually revealed to be an absolute fraud, as confessed by the “haunted” couple’s lawyer. (Thereby preventing American Standard from having to put a warning sticker on all of their toilets that read, “If fills with blood keep flushing and praying and screaming.”)

So you could easily move in without fear or holy water, since the house has had many owners over the years, all of whom have experienced nothing more frightening than people constantly taking photos of their house and the absolute horror that is Long Island real estate taxes.

Of course, living in the White House requires you winning the presidency, being related to the President, or maybe subletting it when the President’s family is on vacation so long as you promise to water all the plants and walk the dog.

And if you do move in you’ll be greeted by Abigail Adams, the first First Wife to live in the White House who is still seen hanging laundry in the East Room, probably because all of the original staff didn’t bother returning after dying and John Adams apparently still can’t walk by a tureen of pheasant stew without spilling it all over his pantaloons crotch.

But, of course, your most impressive spectral companion will be the 16th president himself, Abraham Lincoln, who has been spotted several times wandering the halls as if trying to remember where the bathroom is and reportedly has used his “psychic powers” to communicate with such visitors as Winston Churchill.

In addition you’ll see the ghost of Dolly Madison in the Rose Garden, hear Andrew Jackson laugh in the Rose Bedroom and Thomas Jefferson play violin in the Yellow Oval Office (while no doubt wondering how the hell anyone could tell that’s Jackson’s laugh or Jefferson’s violin), see William Henry Harrison in the attic (probably cursing himself for not wearing a jacket on his inauguration and thus dropping dead 32 days into his presidency from pneumonia), and see a battalion of British soldiers walk by, wondering when anyone will tell them if the Revolutionary War is over yet.

Touted as “one of America’s most haunted houses” by the owner who currently runs a “haunted bed and breakfast” there (so you know that’s an objective, scientific finding), the Myrtles Plantation near Baton Rouge is said to be the home of at least 12 ghosts, all of who still think the oppressive Louisiana summer heat will one day kill them. But with a dozen ghosts to keep you entertained you would never be bored or ever fall asleep.

Perhaps you’ll see the ghost of the original owner, who is said to constantly stagger up the stairs only to drop at the 17th step, where he reportedly died from a gunshot wound. Or you might be checking yourself out in the mirror only to see the trapped spirits of the owner’s wife and their two kids, leaving hand prints on the glass as they possibly silently judge you on how you part your hair.

Maybe you’ll even witness the floating ghost of a little girl who passed away there in 1868 and now people say “practices voodoo” on those who sleep on the site of her deathbed. And if you decide to have a housewarming party your guests will absolutely marvel at the human-sized blood stain on the wall that can’t be scrubbed away, the repeated marching of killed Union soldiers, and the fact that the entire house is built on an ancient Native American burial ground. (Because at this point why the hell not?) Put all that together and you’ll have a home that makes for a great conversation piece, even if the only conversation is “You know you got screwed royally on the sale price, right?”

Now THIS is what a haunted house should like! And it’s even a castle, though it’s not even remotely a castle but rather a typical 19th century home that was—as Gothic architects would say—“pimped out” with gargoyles, turrets, a tower, and everything that would make a feudal lord wet his pants. Located in Cleveland, Ohio, the Franklin Castle was reportedly the scene of a few deaths including the hanging of a 13-year-old girl named Karen (the result of a somehow “accidental” strangulation that was then made to look like a suicide).

And according to numerous eyewitnesses, it’s Karen who would be your constant roommate if you moved in, as she stands dressed in black outside in the upper balconies, places her cold hands around your neck and squeezes to simulate her own choking, moans all night, and probably doesn’t chip in for food and cable.

Karen even has her own special room on the third floor which is said to be always ten degrees colder than the rest of the house and features only a single, round table, perhaps because Karen likes to spend eternity playing poker with ghost dogs. But if you don’t mind sharing, freezing, and occasionally yelling, “Pipe down, Karen! I’m watching the game!” then this place can be yours.