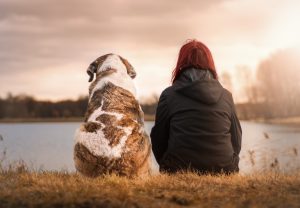 We humans—we think so much of ourselves. We think that just because we’re at the top of the food chain and have opposable thumbs, we are far higher up the spiritual ladder than animals. The fact is, it’s just not so.

Unfortunately, we confuse biological evolution with spiritual evolution. The truth is, most pets are more Zen in a day than most of us will ever get in a lifetime. We can actually learn a lot by turning to our furry, four-footed friends.

Animals don’t sugar-coat it. If they like you, they’ll tell you. If they don’t like you, you’ll know it. If they’re happy, sad, angry, annoyed or scared, you can see it just by looking at them.

They don’t hold back and they don’t cover up—they are totally honest with their emotions to a fault, and unapologetically.

Give Up the Little Grudges

What’s more than being honest about their own emotions, they fully accept and embrace emotional honesty without holding it against you. They’re not insulted by another creature growling or snapping at them—even if it’s you. They walk away and come back later when you’re feeling less impatient.

If you forget to feed them or are late for their walk, they don’t give you the cold shoulder and spend all night throwing passive-aggressive insults your way. As soon as the food is on the floor or their little paws hit the pavement, everything is copasetic. Life’s too short for grudges.

How many times in your life have you said, “I should have went with what my gut was telling me”?

Animals are so attune with their own inner feelings and environment that they don’t second-guess their instincts. If that little tug in their tummies tells them someone isn’t trustworthy, they assume a more defensive position, or run away, or attack. On the flip side, if they feel they can trust you, before you know it they’re crawling onto your lap, turning over to expose their underbelly.

Live Life in the Moment

Animals usually look contented. Unless they’re in pain or under a direct threat, they trot along happy-go-lucky, or lie there in the warmth of the sun or the comfort of a big blanket.

They don’t replay their past mistakes over and over again. They don’t relive the pain and the horror of the past, wasting their precious moments on what they could have done different. It doesn’t matter—it’s all water under the bridge.

They live in the now—animals bask in the moment and milk all the joy out of it that they can. They don’t waste one moment worrying about another. They take them as they come.

Humans complicate relationships so much. We wonder what we’ll get out of it, or how much we’ll have to sacrifice for it and put into it. Animals don’t do that.

When an animal loves you, it just loves you. There are no conditions. They don’t expect anything from you but your love. They don’t care what you’re thinking or about the mistakes you’ve made. All they care about is that you have a bond, and they are going to cherish that bond with you, without judging you or looking to get something out of it.

If we could only learn from our pets, our lives may be as happy as theirs are.