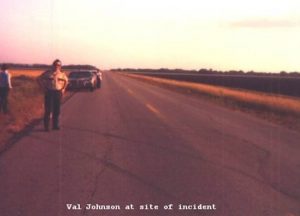 The Deputy Val Johnson of Marshall County had a chilling encounter with an unknown object four decades ago, reports “Grandforks Herald”.

Johnson patrolled a stretch of highway around 20 miles from Warren in the early hours of August 27, 1979 when he saw an abnormally bright light floating over the road.

He witnessed the light moving towards him, after reporting the phenomenon to Marshall County dispatcher Pete Bauer, until it was directly overhead, at which point he lost consciousness.

He had burns around his eyes when he woke up 30 minutes later and his patrol car suffered substantial harm including a smashed headlight and a shattered rear window.

The two antennas were bent in various directions and the dashboard clock had stopped.

Deputies responding to Johnson’s call for help found the squad car sideways on the road.

After the incident, a medical doctor who examined Johnson compared his burns to “welder’s burns.”

“He said ‘I don’t know what happened. Something hit me,'” said Bauer. “Those people who would doubt, you can’t doubt this.”

No conclusive explanation has ever been found to this day for what occurred that night.