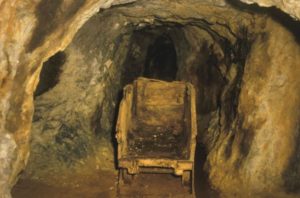 In the middle of the nineteenth century, miners discovered hundreds of stone artifacts and human skeletons deep inside their tunnels at Table Mountain and other locations in the gold mining region.

These bones and artifacts were found embedded in formations that geologists now say belong to the Eocene period (38-55 million years). This evidence was reported to the scientific world by Dr. J. D. Whitney, the chief government geologist of California, in his book The Auriferous Gravels of the Sierra Nevada of California, published by Harvard University’s Peabody Museum of Comparative Zoology in 1880.

But the evidence was dropped from scientific discourse because it contradicted with the current Darwinist explanations of human origins. In 1849, gold was discovered in the gravels of ancient riverbeds on the slopes of the Sierra Nevada Mountains in central California, drawing hordes of rowdy adventurers to places like Brandy City, Last Chance, Lost Camp, You Bet, and Poker Flat.

At first, solitary miners panned for flakes and nuggets in the gravels that had found their way into the present streambeds. But soon gold-mining companies brought more extensive resources into play, some sinking shafts into mountainsides, following the gravel deposits wherever they led, while others washed the auriferous (gold-bearing) gravels from hillsides with high-pressure jets of water.

The miners found hundreds of stone artifacts, and, more rarely, human fossils. The most significant artifacts were reported to the scientific community by Dr. J. D. Whitney.

The artifacts from surface deposits and hydraulic mining were of doubtful age, but the artifacts from deep mine shafts and tunnels could be more securely dated. J. D. Whitney thought the geological evidence indicated the auriferous gravels were at least Pliocene in age.

But modern geologists think some of the gravel deposits are from the Eocene. Many shafts were sunk at Table Mountain in Tuolumne County, going under thick layers of a basaltic volcanic material called latite before reaching the gold-bearing gravels.

William B. Holmes, a physical anthropologist at the Smithsonian Institution, said, “If Professor Whitney had fully appreciated the story of human evolution as it is understood today , he would have hesitated to announce the conclusions formulated, notwithstanding the imposing array of testimony with which he was confronted.”

In other words, if the evidence did not fit the theory, then the evidence had to be set aside, which is exactly what happened. Today, some of the artifacts mentioned by Whitney are still in the Phoebe Hearst Museum of Anthropology at the University of California at Berkeley.

Darwinism and other isms also influenced the treatment of archaeological evidence at Hueyatlaco, Mexico. In the 1970s, archaeologists led by Cynthia Irwin-Williams found stone tools associated with butchered animal bones in excavations there.

A team of geologists, including Virginia Steen-McIntyre, came in to date the site. Using four different methods (uranium series dates on butchered animal bone, zircon fission track dating on volcanic layers above the artifact layers, tephra hydration dating of volcanic crystals found in the volcanic layers above the artifact layers, and standard stratigraphic analysis), the geologists determined the age of the site was at least 250,000 years.

The Ġgantija Temples: Ancient Island of the Giants