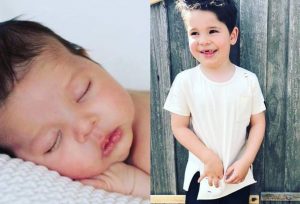 Mom from Australia Laura Mazza shared an amazing story on Facebook. Her four-year-old son told her about his memories before birth. In particular, he reminded her of the miscarriage that she had before his birth.

Laura has a four-year-old son, Luke, who has always been “wise and said interesting things,” and sang ancient songs that he could not hear anywhere else. According to his mother, he reasoned like a “little old man.”

One day son made Laura burst into tears when he told her a strange story. He recalled that he had once died in her tummy, then became an angel, and later returned again.

“Yes, Mom, I lived in your tummy … I was there, but then I died. I went to look for you, but I did not find. I went to your house, walked everywhere, but you did not hear me when I called you. Then I became an angel. ”

“I missed you, so I wanted to come back to you again to be a baby in your tummy, and then I was born.”

Hearing this, Laura burst into tears. She really had a miscarriage.

“Before I became pregnant with Luke, I had a heavy bleeding. I remember that I had a positive pregnancy test, and after a few days severe pain and heavy periods began. ”

However, Laura never told her son about her miscarriage, just as she did not talk about angels. The story of her son convinced her that the angels exist, and the children themselves choose their parents.

“I just looked at him and cried … Our children know what mothers they need, long before we learn about their existence. This is proof that they really choose us, and their souls are always with us in this or next life. ”, – said Laura Mazza.

Another giant UFO flies into the mouth of the volcano Popocatepetl