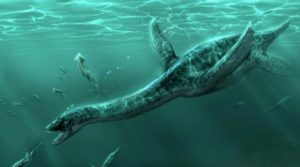 The USS Massachusetts was sunk off the coast of Pensacola, Florida, in 1921. The ship is in shallow water and partly above water, it is a popular destination for divers.

While the majority of those who dive on the wreck of the Massachusetts have a great experience, that is not always the case.

On March 24, 1962, a group of 5 young men got on a rubber raft and set out to explore the wreck. By the end of the day only one of them would be alive.

Despite the warning of a stormy sky, the 5 friends, Edward McCleary, Warren Salley, Eric Ruyle, Larry Bill and Brad Rice headed towards the wreck site.

As they got close to the dive site the winds increased dramatically. Soon the small raft became unstable in the large choppy waves.

Then as the sun was beginning to set, the rain started and the fog moved in. The decision was then made to abandon the raft and swim towards the wreck.

With the rapidly deteriorating weather and quickly approaching darkness, visibility was poor when the young men found that they were not alone.

McCleary described the scene. They heard splashing, a loud hissing sound and smelled the odor of rotting flesh. Then he, McCleary, saw something.

It was about 10 feet long and shaped like a pole or long neck. It quickly became obvious that what McCleary saw was a living creature as it pulled Eric Ruyle under the water with McCleary looking on.

McCleary was not sure if their were more than one of the creatures but Brad Rice was the next one to be pulled under by the creature or creatures.

Soon after, Warren Salley began screaming and like the others disappeared beneath the surface. Edward McCleary never knew what happened to Larry Bill as he faded away in the fog.

It’s a strange story but it is true. McCleary was the only one who made it back to shore alive. The body of Brad Rice later washed up on the beach but the 3 others remain unaccounted for.

What the 5 friends encountered will never be known, but from the description given by McCleary, some believe that the young men may have discovered a not so extinct plesiosaur.

Nancy Kerlin Barnett’s Grave In The Middle Of The Road