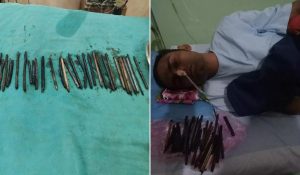 On July 14, 30-year-old Indian Yogesh Tahur was taken to hospital with severe abdominal pain. Doctors were shoked to see on X-rays that the man’s entire stomach was full of hard, long objects.

According to his mother Kushma Tahur, her son has a mental disorder and he often swallows inedible objects.

To extract foreign bodies, Yogesh had to undergo surgery. 33 items were found inside, including a knife, a razor and a screwdriver.

The psychiatrist says that Tahur has acupagia (a desire to swallow sharp objects). Most often it occurs in women and children in poor countries, but it is often observed in people with schizophrenia and autism.

The mother said that her son had suffered from this disease since childhood, but she still hoped that as an adult, he would stop swallowing inedible and dangerous items.

“It was a complicated operation, because the patient also suffered from high blood pressure. We were all in shock when we pulled out more than 30 sharp objects from it,” says Dr. Khar.

Now the patient is under intensive supervision and will be in the hospital for some time.