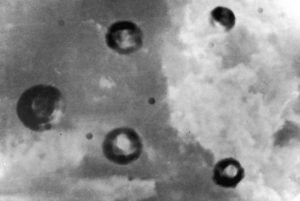 The UFO phenomenon is full of mysteries, and I’m not talking about what the government and other agencies are hiding from us.

There is a huge number of sightings each year, each of them having distinct particularities, so there is no risk of dying of boredom when analyzing these cases.

So why is there no official action directed towards these things? Why there’s no signal picked up by our advanced ground radars you might ask? Or why is there no trace of a downed alien craft if the appearances are so numerous?

According to some UFO analysts, the answer is quite simple – UFOs are more diverse than what you would expect.

They can vary from advanced artificially designed crafts such as the notorious Black Knight satellite, to speeding orbs that are capable of performing law-defying maneuvers, and last but not least, the organic UFOs.

Apart from this, the government won’t let us know about any such out-of-place incident, although rumors have it that everything mentioned above had already happened in the past.

If we look at the first type of UFO – the artificially designed craft of either earthly or alien origins, it’s easy to imagine a cover-up scenario.

If the officials manage to get their hands on one of these extremely advanced pieces of technology, they are in for a treat because such a great “technological cake” would serve them well, and they’ll probably share it with no one.

Such a craft might be extremely hard to capture. However, according to numerous accounts, the above scenario is likely to had happened. If this type of UFO is artificial, then our earthly radars should be able to track it and ultimately capture it.

So why is there no official evidence to back-up these claims? Well, because officials cannot be trusted when it comes to revealing classified information, but fortunately for us, there are some brave people who succeeded in smuggling actual footage of UFOs being chased by the military.

The below video surfaced in 2014 and it shows how a Black Hawk helicopter belonging to the Aguadilla Coast Guard is pursuing a presumed UFO.

Watch carefully at 01:24 (timer displayed in upper left corner), when a second UFO comes out of the ocean joining formation with the original one, then both crafts smoothly descend into the water, seemingly unaffected by the hydrodynamic forces.

The second UFO example is the orb UFO. These small buggers appear to be the size of a drone and they’re capable of reaching tremendous speeds at a very high altitude while also performing impossible maneuvers such as brusque turns and drop-offs.

This particular UFO type is the most intriguing since there are no earthly devices that can match them. UFO researchers and enthusiasts have been documenting these peculiar orbs, and consider them to be artificially intelligent devices that are either remote controlled or piloted on their own. Below is a classic example of an orb UFO.

Alas, the third type of unidentified flying object – the mysterious organic beings. This particular appearance is extremely puzzling to say the least.

Franklin Ruehl, the renowned American ufologist and cryptozoologist depicts these UFOs as otherworldly beings that evolved from organic compounds found in space in order to survive its seemingly unlivable conditions, and may very well be the first lifeforms to arrive in the cosmos.

Different videos show how these beings are shape shifting in the sky, morphing into various forms while steadily floating at high altitude, and when highlighted by the Sun, they form an aura of rainbow colors.

These UFOs are also found in large groups, similar to a flock of birds, and some people even claim to summon them using only telepathic abilities.

The UFO phenomenon is real and it’s intensifying. If it involves actual alien beings or secret military technology we are yet to find out, and considering the great technological advancement of our species, the hour of disclosure might come sooner rather than later.

What awaits earthlings if extraterrestrial intelligence is discovered