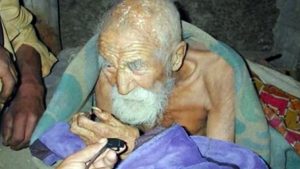 As a rule, Indians live for about 70 years. However, there are exceptions, for example, the hero of this story, who today is 184 years old.

A man named Mahashta Murashi considers himself immortal, he thinks that the wicked lady with a scythe will never come for him.

Throughout his life, Makhashta worked as a shoemaker, only at 122 he decided to “retire”. At 68, a man moved from the south of India, where he was born, to Varanasi – the city where the chain of rebirths ends. For a long time, Makhashta has been waiting for death.

A man has seen his heirs born and die. Many grandchildren and great-grandchildren have completed the “next” life cycle.

Some people believe that the hero of this story managed to slow down the metabolic processes in the body, but how?

The man himself said that throughout his life he calmly accepted the tests of fate. He continued to go his own way, looking at the things that were happening with optimism. Perhaps this is the key to longevity.

However, a man has no documents and medical tests that could show the true age have not yet been invented, so it is impossible to check his age.

The solar wind rushes to Earth at a monstrous speed