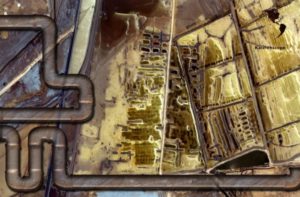 Who could have built such a complex structure 150,000 years ago, at a time when a man had barely started using fire?

The Baigong pipes are one of the greatest mysteries of the ancient world. They can be found inside a badly-eroded pyramid located on top of Mount Baigong in the Qinghai Province of northwestern China.

The crumbling pyramid once had triangular entrances on three of its sides but over time, two of them caved in and are currently inaccessible. The one that remains goes deep inside the mountain. Iron scraps and unusually-shaped stones litter the floor, suggesting that long ago, this place saw activity.

The only remaining cave houses an intricate network of metal pipes, with diameters as large as 1.5 feet and as small as a toothpick. Dozens of pipes run straight into the mountain, leading who knows where.

Some of the archaeologists who visited the site speculated the pipework could have once supplied water to the pyramid. Their theory seems to be supported by a multitude of iron pipes found on the shores of nearby Lake Toson. These ones are also available in a range of lengths and diameters, some reaching above the water surface, others buried below.

Intrigued by these out of place artifacts, the Beijing Institute of Geology analyzed the Baigong pipes using a technique called thermoluminescence. This method allowed them to determine when the pipes were last subjected to high temperatures. Analysis showed the pipes must have been crafted 150,000 years ago.

And the mystery goes deeper. Analysis performed at a government-operated smeltery was unable to determine the exact composition of of the pipes. Although the pipes were made up of ferric oxide, silicon dioxide and calcium oxide, they also contained 8% unknown material.

There is no easy way to explain this mind-boggling discovery. Human presence in the region can be traced back to 30,000 years ago but was mainly comprised of nomadic tribes. It would have been impossible for a primitive society to leave behind such an advanced structure.

A number of theories have made attempts to explain who could have built these pipes and what purpose they might have served. An advanced but long-forgotten human civilization could have constructed a facility that required coolant, and the pipes leading to the lake nearby are all that’s left.

One interesting aspect is that the water in the lake is salty. And although there is a freshwater lake in the vicinity, there are no pipes leading into it. Why the need for saltwater?

One potential answer is electrolysis. When an electric current is ran through saltwater, it breaks down the water into hydrogen and oxygen. Such products are a must-have for any civilization operating aircraft. That particular civilization doesn’t even have to be human.

At the other end of the spectrum we have several geologists who believe the pipes are some type of unusual but natural formations.

Another theory is that the pipes are fossilized tree roots. Xinmin Weekly reported in 2003 that scientists found plant matter in an analysis of the pipes, and they also found what looked like tree rings.

The article related the finding to a geological theory that in certain temperatures and under certain chemical conditions, tree roots can undergo diagenesis (transformation of soil into rock) and other processes that can produce iron formations.

Reports on the tree-root explanation for the so-called Baigong pipes often lead back to this Xinmin Weekly article or lack citation. It’s unclear exactly how well-supported this theory is in relation to the Baigong pipes.

The fact of the matter is that these are just theories attempting to explain something that simply doesn’t fit with the accepted system of beliefs.

One thing is certain—until history is rewritten, anomalous artifacts such as the Baigong Pipes have no place in conventional textbooks.