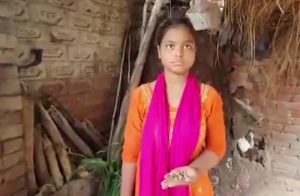 A 15-year-old girl from Kannauja, Uttar Pradesh, northern India, has attracted the attention of the public, especially doctors, who argue that her illness cannot be medically explained, reports the Daily Star.

Her family members say that in almost two months, from 10 to 15 stones crawled out of her left eye.

Local doctors are stumped because they cannot explain how a teenage girl can cry with stones.

In the video, which was filmed in the village of Gadia Balidaspur, a small bump is visible in the upper part of the eyelid of the girl, then a small object similar to a stone falls from her eyelid.

The family consulted with doctors – they all insist that it is simply impossible from a medical point of view.

In 2014, Mail Online reported about 12-year-old Saadia Saleh from Yemen suffering from a similar phenomenon. The doctors said that they still cannot find an explanation for him, since the girl does not suffer from any known disease.

Unfortunately, this strange phenomenon has caused panic in rural India, people believe that the girl is possessed by evil spirits.

The video posted on YouTube was broadcast on the Yemeni satellite TV channel Azal. In the video, the doctors assembled a small box of stones that fell out of her eyes.