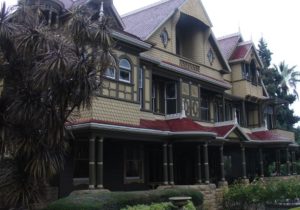 Despite the Winchester Mystery House’s cheerful appearance, this massive California mansion’s history is edged with tragedy, mystery and maybe some ghosts.

Naturally, it has inspired a chilling horror movie Winchester, but before you go to watch the movie, wander through the curious past of one of America’s most infamous homes.

1. THE WINCHESTER HOUSE IS NAMED FOR ITS MISTRESS

Sarah Lockwood Winchester—the wife of gun magnate William Wirt Winchester, whose family created the Winchester rifle that was heraldedas “the gun that won the west”—designed and oversaw the construction of the sprawling Queen Anne-style Victorian mansion that bears her name.

Construction on the 24,000-square-foot home, which is located at 525 South Winchester Boulevard in San Jose, California, began in 1886.

2. MANY BELIEVE SARAH BUILT WINCHESTER HOUSE OUT OF FEAR

Overcome with grief in the wake of her husband’s death from tuberculosis in 1881, folklore states that Sarah sought out a spiritualist who could commune with the dead. While she was presumably looking for solace or closure, she was instead given a chilling warning.

Through the medium, William told his widow that their tragedies (the couple had only one child, a daughter named Annie, who died at six weeks old) were a result of the blood money the family had made off of the Winchester rifles.

He warned that vengeful ghosts would seek her out. In order to protect herself, William said that Sarah must “build a home for [herself] and for the spirits who have fallen from this terrible weapon.”

Sarah was advised to leave their home in New Haven, Connecticut, behind, and move west, where she was to build a grand home for the spirits. There was just one catch: construction on the house could never stop. “If you continue building, you will live,” the medium warned Sarah. “Stop and you will die.” 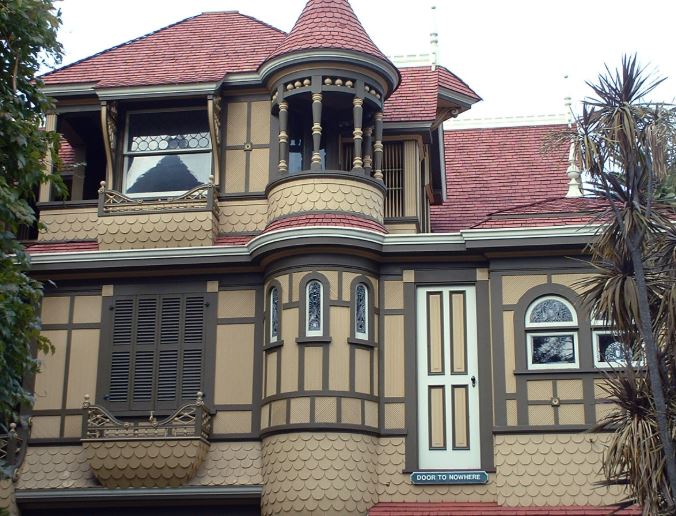 3. THE HOUSE WAS UNDER CONSTANT CONSTRUCTION FOR 38 YEARS

In 1886, Sarah purchased an eight-room farmhouse in San Jose, California, and began building. She employed a crew of carpenters, who split shifts so construction could go on day and night, seven days a week, 52 weeks a year, for 38 years.

The work only stopped on September 5, 1922, because the octogenarian mastermind behind the home died of heart failure in her sleep. It’s said that upon hearing the news of Sarah’s death, the carpenters quit so abruptly they left half-hammered nails protruding from walls.

4. THE HOUSE IS FULL OF ARCHITECTURAL ODDITIES

Sarah issued many bizarre demands to her builders, including the building of trap doors, secret passages, a skylight in the floor, spider web windows, and staircases that led to nowhere.

There are also doors that open to blank walls, and a dangerous door on the second floor that opens out into nothing—save for an alarming drop to the yard far below.

5. AN EARTHQUAKE ONCE RATTLED THE HOUSE AND TRAPPED SARAH

In 1906, the great San Francisco Earthquake caused three floors of the then seven-story house to cave in. A 1900 postcard of the place shows a tower that was later toppled by the natural disaster.

That tower—plus several other rooms destroyed in the disaster—were never rebuilt, but cordoned off. As for Sarah, she was safe but stuck in the Daisy Bedroom, named for the floral motif in its windows. She had to be dug out by her staff, as its entrance was blocked off by rubble.

Some say the labyrinth layout was meant to confuse the ghosts, allowing Sarah some peace and a means to escape them. She was the sole architect of this extraordinary home, and no master building plan has ever been uncovered.

So Sarah may be the only person who ever truly knew all of its secrets. When movers were called in after her death, one lamented its labyrinthine design that includes many winding hallways.

One mover told American Weekly the Winchester House was a place “where downstairs leads neither to the cellar nor upstairs to the roof.”

7. SOME SAY THE SYMBOLS IN THE HOUSE POINT NOT TO GHOSTS, BUT FRANCIS BACON

An alternate theory on the Winchester House’s perplexing design declares that Sarah was creating a puzzle full of encryptions inspired by the work of English philosopher Francis Bacon.

There’s speculation that clues to the house’s true meaning are hidden in the ballroom, the Shakespeare windows, and the iron gates. This theory suggests that Sarah was a member of a mystic society like the Rosicrucians, or a secret society like the Freemasons—or possibly both.

8. THERE ARE OTHER THEORIES, INCLUDING THAT SARAH WAS “CRAZY”

Others speculate Sarah was coping with her grief with a flurry of activity, or that she was simply “crazy.” However, Winchester Mystery House historian Janan Boehme paints a happier picture, imagining that the continual renovations reminded Sarah of the good times when she and William built their New Haven home together.

“I think Sarah was trying to repeat that experience by doing something they both loved,” Boehme told the Los Angeles Times. She also suspects that Sarah was just an ardent—albeit eccentric—philanthropist who used her family fortune to purposefully employ the San Jose community.

“She had a social conscience and she did try to give back,” Boehme offered, noting the hospital Sarah built in her husband’s name. “This house, in itself, was her biggest social work of all.” 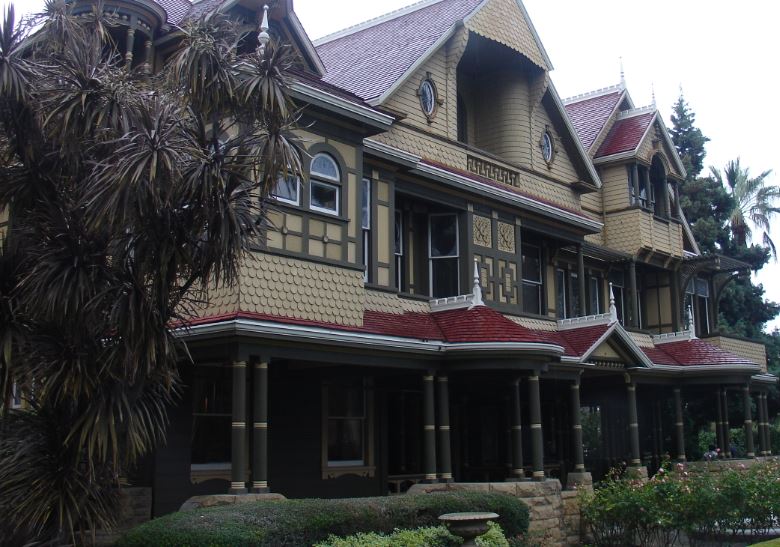 9. ONCE IN WINCHESTER HOUSE, SARAH WAS RECLUSIVE, BUT NOT ALONE

There is only one known photo of the widow Winchester, which was taken surreptitiously. Though she was reclusive, she was never alone. She had 18 servants, 18 gardeners, and the ever-present construction team working on the grounds.

Every morning, Sarah met with the foreman to discuss the always-evolving building plans. And it’s said that each night, she visited the Séance Room to speak with the spirits, who weighed in on plans for the house’s unusual design.

10. THE HOUSE WAS AS OPULENT AS IT WAS ODD

11. NO ONE IS SURE HOW MANY ROOMS THE HOUSE HELD

Following Sarah’s death, Winchester House was converted into a tourist attraction. But when trying to get a room count, the new owners kept coming up with different numbers.

After five years of renovations, they estimated the number of rooms to be about 160, which is the number most often quoted today.

12. SARAH HAD AN OBSESSION WITH THE NUMBER 13

Among the secrets Sarah took to her grave was why she insisted that so many things relate to the number 13. The Winchester House has many 13-paned windows and 13-paneled ceilings, as well as 13-step stairways.

Even her will had 13 parts, and she signed it 13 times. But the pièce de résistance might be the house’s 13th bathroom, which contains 13 windows of its own.

The Winchester Mystery House earned landmark status on August 7, 1974. The fascinating mansion is still owned by the family (families?) who purchased it from the Winchester estate in 1922 for $150,000—however, their identity is another Winchester House mystery.

But thanks to them, tourists can now explore 110 of the 160-some rooms Sarah dreamed up. The Winchester Mystery House even boasts special tours on Halloween and Fridays the 13th.

14. IT’S REGULARLY CITED AS ONE OF THE MOST HAUNTED PLACES IN AMERICA

To this day, Winchester House is a destination for believers who hope to have a paranormal encounter of their own. A popular spot for such activity is the corridors of the third floor, where tour guides have claimed to hear footsteps and disembodied voices whisper their names.

In a Reddit AMA, a Winchester House tour guide confirmed that the house’s third floor—only a portion of which is accessible during house tours—is definitely the spookiest part of the house, “because that’s where the servants lived, so there’s been a lot of reported activity there. Also, when you are on that floor you can never really hear any of the other tours, so you feel pretty isolated.”