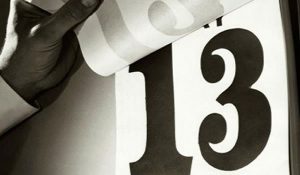 The number 13 is associated with bad luck in many countries, and even has a specifically recognized phobia, Triskaidekaphobia, a word which was coined in 1911.

Friday the 13th has been considered an unlucky day since the 1800s, as a combination between an unlucky day, Friday, and the number 13.

The Egyptians were the first to develop a superstition for the number thirteen, but for them the number brought good luck. They believed that there were 12 steps on the ladder to eternal life and knowledge and to take the thirteenth step meant going through death into everlasting life.

13, for the Egyptians, was associated with immortality. The Mesopotamian Code of Hammurabi (1760 BC) omits 13 in its numbered list. This seems to indicate a superstition existed long before the Christian era.

We’re told that thirteen is an unlucky number. The date Friday the 13th is taboo because the Knights Templar were arrested and condemned by the seneschals of Philippe IV, King of France, in a “pre-dawn raid” on Friday, October 13th, 1307.

The number 13 has been shunned for centuries. Some Christian traditions have it that at the Last Supper, Judas, the disciple who betrayed Jesus, was the 13th to sit at the table, and that for this reason 13 is considered to carry a curse of sorts.

Still up to now it is considered very bad luck for thirteen people to sit down for dinner together. It’s believed that one of the dinner guests will die within the year.

Triskaidekaphobia may have also affected the Vikings—it is believed that Loki in the Norse pantheon was the 13th god More specifically, Loki was believed to have engineered the murder of Baldr, and was the 13th guest to arrive at the funeral.

This is perhaps related to the superstition that if thirteen people gather, one of them will die in the following year.

This was later Christianized in some traditions into saying that Satan was the 13th angel. Another Norse tradition involves the myth of Norna-Gest: when the uninvited norns showed up at his birthday celebration—thus increasing the number of guests from ten to thirteen—the norns cursed the infant by magically binding his lifespan to that of a mystic candle they presented to him.

Ancient Persians believed the twelve constellations in the Zodiac controlled the months of the year, and each ruled the earth for a thousand years at the end of which the sky and earth collapsed in chaos.

Therefore, the thirteenth is identified with chaos and the reason Persian leave their houses to avoid bad luck on the thirteenth day of the Persian Calendar (a tradition called Sizdah Bedar).

Thirteen was a number central to certain traditions of sacred geometry, because it reflected a pattern which could be seen to exist in man, nature, and the heavens.

For example, there are 13 major joints in your body. There are 13 lunar cycles in a solar year, and the moon travels 13 degrees across the sky every day.

Is it possible that the folklore associated with the number 13 is absolutely apocryphal? Or that it has become a demonized numeral precisely because it was sacred in pre-Christian times?

Some peoples believe it is an emblem of a secret knowledge, a knowledge which does indeed confer power upon those conversant with it. It is a knowledge that religious orthodoxies have long feared and tried to suppress.

Perhaps this is why the number 13 has always been associated with magic and the occult, and why it is a number perceived to possess some mysterious yet tangible power.

13 may be perceived as unlucky to those who fear the secret gnosis (Gnosis from one of the Greek words for knowledge, γνώσις is the spiritual knowledge of a saint or mystically enlightened human being) it represents, but for adherents of that gnosis it is (as it always was), a sacred number.

Most hotel chains have no room number thirteen and many skyscrapers are without a thirteenth floor. Some architects omit the 13th floor from office buildings to this very day.

Still, to this day, the superstition lives on.