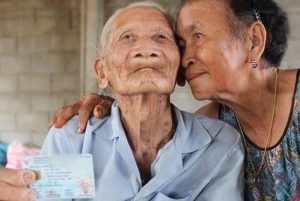 A man lives in Thailand who claims to be 128 years old. According to his identity card, he was born on April 9, 1891 – during the reign of King Rama V.

Orn Parnchompoo is married to 70-year-old Song Parnchompoo, and they have 7 children and 11 grandchildren who live in northeast Thailand in the village of Ni Sombun.

According to the Thai man, love, clean food and exercise are his secret to longevity. In support of his words, he demonstrated his strength, easily climbing the stairs and sweeping the floor in his home.

The long-liver told that all his friends had died long ago, and he misses them very much. However, if possible, he would like to live up to 200 years.

Officially at the moment, the oldest of the now living people is considered German Gustav Gernet, who is already 113 years old.