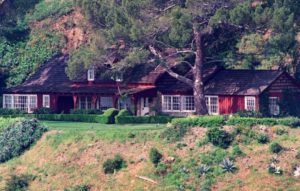 10050 Cielo Drive was the street address of a former luxury home in Benedict Canyon, in the west-central part of the Beverly Crest neighborhood of Los Angeles, bordering Beverly Hills, where the Charles Manson “family” committed the Tate murders in 1969.

The Tate–LaBianca murders were perpetrated by members of the Charles Manson “Family” in Los Angeles, California. They murdered six people and two more the following evening.

On the night of August 9, four members of the Manson Family invaded the rented home of actress Sharon Tate and movie director Roman Polanski at 10050 Cielo Drive in Los Angeles.

They murdered Tate, who was 8½ months pregnant, along with three friends who were visiting and an 18-year-old visitor who was slain as he was leaving the home. Polanski was not present on the night of the murders, as he was working on a film in Europe.

After the murders at 10050 Cielo Drive, the owner of Cielo Drive, Rudy Antobelli, had a hard time selling the house. In the following years, the stigma attached to that house never left.

A dark pervading air seemed to settle on the house and the surrounding property, or so some believed. There would be renters from time to time, but nobody seemed to stay very long. There were stories floating around from people who had visited Cielo Drive after the murders. This following story cannot be validated:

During the seventies, a rental agent was showing the house to a potential renter. She was an old Italian woman who was unfamiliar with the house’s dark history. She was looking for a large rental for her family. She decided to go look at the house at Cielo Drive.

After arriving, the old woman walked up the pathway towards the front door with the agent. The agent would later claim that the woman had an odd expression on her face. Her eyes darted around the property nervously but she said nothing. As the agent showed her into the living room of the house, the woman’s face suddenly turned ashen.

The agent followed her outside and after calming the hysterical woman down, admitted to her about the history of the house but thought she may have already known. The woman refused to rent the house and left the property in quite a state. Later the agent found out that the woman was known to have psychic abilities and was picking up on the past.

But if this story is true, and who can say for sure, she could have also been another ghoul seeking individual who used the ploy of potential renter, just so she could see the infamous “dwelling of death” for herself.

There would be other stories told from those who visited the house. Stories of eerie sounds, cold spots, bad odors, and a “sinking feeling” while walking around inside of the house and the property, but none of these stories can be validated with all certainty.

Whatever the case, after the murders, Cielo Drive seemed to draw more of the strange and freakish to its gates. Sometimes, mysterious people dressed in black would arrive and leave strange gifts outside the gate.

Others were simply thrill-seekers wanting to take photos or secretly film the infamous property. Neighbors of 10050 Cielo Drive tried to ward off the constant barrage of the ghoulish and the curious, but all to no avail.

The final resident of Cielo Drive also had ties to fame. 1993 Twenty-eight year old musician, Trent Reznor of the band “Nine Inch Nails” rented the house on Cielo Drive. The band was working on their second album, “The Downward Spiral.”

They turned the living room (where the murder victims, Sharon Tate and Jay Sebring once lay dead) into a music studio they called “Le Pig.” While recalling the murders, one is reminded of the word “Pig” scrawled in Sharon Tate’s blood on the front door of the house. 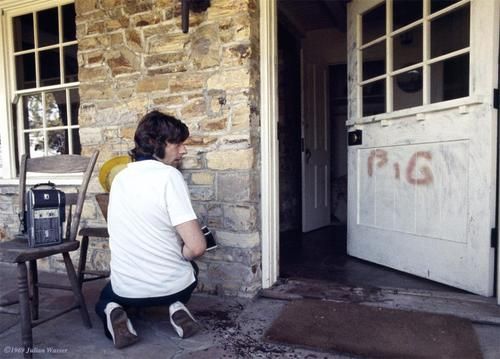 While recording the album, the band supposedly ran into major problems involving electrical disturbances. Trent also mentioned hearing strange sounds and feelings in the house when he moved in. The band also filmed the music video, “Gave Up” during that time.

Knowing the history and the horrific drama that unfolded there on August 9, 1969, you can’t help but sense the hellish stain of the past creep up inside of you and settle in some dark corner of your mind, or sense that there is something sinister that occupies the green expanse and resides among the giant pines and manicured shrubs.

An unsettling feeling of unseen eyes scrutinizing every move you make, and furtive whispers of the past hang thick in the air, subsisting beyond all time and space.

But still there was the residual impact of that summer in August left behind, like an imprint left on the blood stained walk-way of Cielo Drive, which was now washed away but never forgotten.

“While I was working on Downward Spiral, I was living in the house where Sharon Tate was killed. Then one day I met her sister. It was a random thing, just a brief encounter. And she said: ‘Are you exploiting my sister’s death by living in her house?’

For the first time, the whole thing kind of slapped me in the face. I said, ‘No, it’s just sort of my own interest in American folklore. I’m in this place where a weird part of history occurred.’

I guess it never really struck me before, but it did then. She lost her sister from a senseless, ignorant situation that I don’t want to support. When she was talking to me, I realized for the first time, ‘What if it was my sister?’ I thought, ‘Fuck Charlie Manson.’ I went home and cried that night. It made me see there’s another side to things, you know?”

Trent moved out of 10050 Cielo Drive in 1993 and the house was demolished, but not before he took the front door from the house and hung it on his new studio in New Orleans.

I suppose that the “weird part of history” was too tempting to completely leave behind and would follow him, as it does with so many of us. Trent was asked later why he moved out of the house. He replied: “There was too much history in that house for me to handle.”

A new mansion was built on the site where the murders took place. It is called Villa Bella. In all the years after it was built, nobody was interested in buying it. Maybe because of the stigma attached to the property?

Maybe nobody could afford the place? Or maybe because on some warm August nights, while the City of Angels sleep, along the winding roads that lead to the end of a cul-de-sac on Cielo Drive, something still lingers.

Something thicker than the night air, something with substance, yet unseen. Ghosts of the victims of 1969 or dark entities? No one can be certain. But it is a popular belief that where evil deeds are done, evil is said to remain in its stead.

But the house was demolished. So can the ghosts from the past still remain on the land in a state of confusion? Or do malevolent shadowy mists dwell on their claimed territory until the end of time?