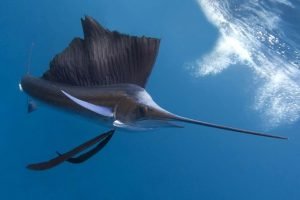 Off the coast of the US state of Florida, a sailfish weighing 100-pound jumped out of the water and pierced 73-year-old Katherine Perkins. It is reported by TCPalm.

Perkins and her friends – 75-year-old Luis Toth and 77-year-old Dominic Bellezza – went to the ocean to fish. About three kilometers from the coast, they managed to catch a large sailfish.

While Toth and Bellezza tried to lift their catch on the line to take a photo, Perkins stood on deck and watched them.

At that moment, the sailfish jumped out of the water and hit the woman with its long, sharp sword.

Thoth and Bellezza called 911 and tried to stop the bleeding on their own with a pressure bandage. Perkins was taken to the hospital, the state of her health is not reported.

The woman told the police that the attack happened so quickly that she did not have time to react.

The sailfish is the fastest swimming fish in the world, it can reach speeds of up to 100 kilometers per hour. Its distinguishing features are a high and long first dorsal fin, resembling a sail in shape, and a spear-shaped snout.